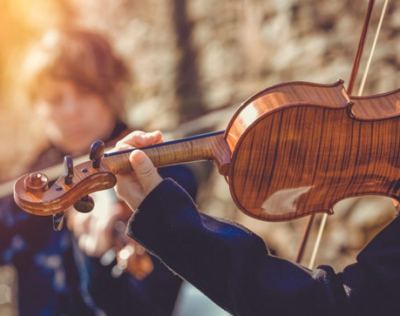 I didn’t realise the importance of choosing the right music until I worked my very first funeral in December 2007. The funeral was for a young couple who died tragically in a car accident, just before Christmas, leaving behind their baby and toddler. They’d only been married for three years and the same priest who married them conducted their funeral service. The funeral music started with chapel music, but as the ceremony started modern music could be heard. It was a Westlife song, “I’ll be loving you forever”, which seemed very fitting for this young couple. I later learned that this same song was also played during their wedding ceremony. It was a poignant choice of music.

When the funeral procession arrived at the cemetery, the coffins were put in place at the burial site. A huge crowd encircled the priest and the coffins. The priest delivered his words of committal as the coffins were lowered. A loud wave of crying, even uncontrollable howling, swept through the grief-stricken crowd. The music that was playing was “I’ll be missing you” (by Faith Hill and Puff Daddy). As the song echoed through the crowd, a few people started swaying, and a few even started singing the lyrics. There was this magical, hypnotic energy which seemed to fill the air.

I was blown away by how the music made this ceremony so special. One thing that stands out from my dad’s funeral, was the horrible music that was played in the church. The music was haunting, sombre, which didn’t reflect my father’s personality at all. The type of music one loves, says a lot about their personality and how they view life. Music helps to set the tone for the funeral, it also leaves a lasting impression and helps to create long-lasting memories of the day.

During a funeral or memorial service, there are various times in which music can be played. The following is a typical run-sheet of how a ceremony can look like at a venue/chapel.

Guests and family, come into venue and sign guest book if available.

Start of the ceremony

Welcome and Words of Comfort -MC/Celebrant/Clergy

Depending on the venue or ceremony you choose, there might be an opportunity to play pre-ceremony or “lingering in” music.  Most chapels or crematoriums have pre-recorded music played a few minutes before the start of the ceremony.

Generally, a song is played just before the ceremony starts. A decision would need to be made if pallbearers were used to bring your loved one into the ceremony space. This is a personal choice, some feel it’s their last gift of love that they are able to give to their loved one. If there is only one or two family members who want to do this, funeral staff are always willing to assist.

Depending on your loved one’s career, hobbies, sports, volunteer organisations, etc – a guard of honour can be formed while the coffin is carried in, for example:

If you decide that you want your loved one “in place”, which means the coffin will be positioned either on a funeral trolley or a catafalque (raised platform which supports the coffin) at the front of the venue, the ceremony will normally commence with a song.

Not all families want reflection time. However, if it is required then it is usually done mid-way through the ceremony. A piece of music is played, guests are invited to approach the coffin if they wish, place a flower or other item (if there are some available) on the coffin and say their own private goodbye. Some families choose not to allow anyone to approach the coffin during reflection time. However, a piece of music is played giving time to reflect on their relationship with the deceased.

Everyone grieves differently, but some comfort can be found by giving those who attend an opportunity to touch the coffin.

If your family decides that they would like a photo presentation done by family or funeral home, accompanying music will be necessary.

The slideshow tribute should ideally be between three and five minutes – six minutes maximum – with one song played throughout (unless a mix of music is compiled) and about 30 to 50 photos.

There is much to be said for short and meaningful, as there are many different elements of the ceremony to get through (speakers, prayers, poems, candle lighting, etc.).

Music is also played when the coffin is being lowered at a burial or the curtain is closing at a cremation. The last moments before the ceremony ends can be the most emotionally charged. Think about that very last piece of music, how do you want your loved one’s ceremony to end?

What to do if you have absolutely no idea?

Choosing appropriate music can be hard. However, there are a few things you can take into consideration when planning the music, which might make the task easier.

Don’t get too wrapped up in making sure the lyrics suit 100%. If the song makes you remember your loved one, or just feels right, then that’s the right song for the ceremony.

If, after reading this, you have decided it really doesn’t matter, then the funeral home, clergy or celebrant could select some suitable music.

If your loved one was a musician, then it would be fitting to have live music played if possible, such as:

The power of music…

The power of music cannot be underestimated. Music unites people, evokes memories of certain stages in their life, it brings joy, sadness and sets the tone.

What would you want your funeral song to be? Think about creating a playlist of your life, so when the time comes your family will have this beautiful gift that will remind them of you during this special time. It’s a beautiful gift for your loved ones.