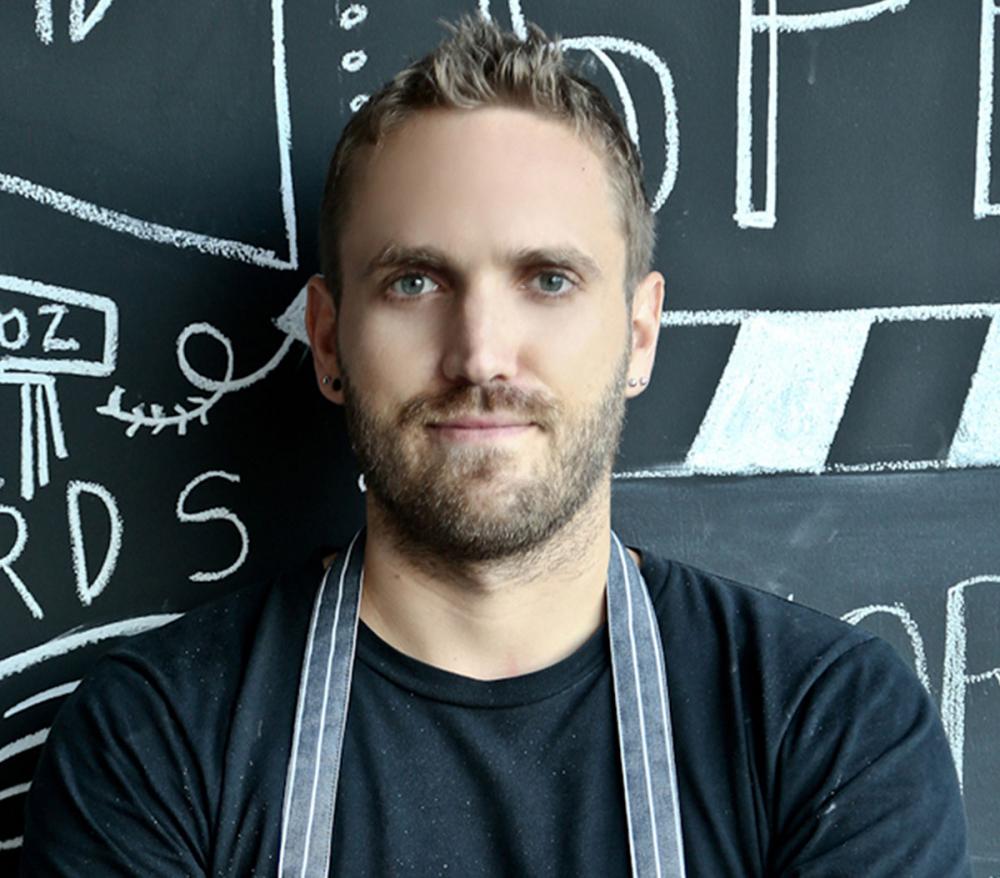 Dave  was welcomed into the world on the 16th of May 1984 in Westmead to Dick and Debby, he joined his brother Nick and his sister Sara, Dave’s birth completed the Sanderson family.

Dave would live in the family home in Hazelbrook and  went to primary school at Our Lady of Nativity in Lawson and would go to high school at St Columbus.  At St Columbus he developed close relationships with his mates, Steve, Anthony, Chris and Andy.

The academic life wasn’t for him, and he would finish school in 2000. He was actively involved in a  Motorcross Team, which would meet in Clarence.  He joined this group at a tender age of 10 and stayed till he was 17.  He loved riding along the dirt tracks and the adrenaline he experienced while jumping mid air.

Being athletic and fit, he was also involved in the Korean martial art, Taekwondo. He would receive awards at National competitions in Sydney and Melbourne.

Once he turned 18, his parents offered him either a birthday party or a Tandem Skydive in Picton, he decided on the later and he was permanently hooked.

Another interest which developed in his late teens, while working for his brother in law, Ryan, at the Bakehouse was discovering a passion for baking.  He didn’t just see it as baking, but a creative form of expression.  He would go on complete his apprenticeship and work in many fine dining restaurants in the city, among those being Firefly Restaurant and Jamie’s Italian Sydney.

He would live in various places in the city, but his fondest times were at a share house on Wigram Street known as the Wiggy.  He thoroughly enjoyed spending time with his mates, played to the crowd and whenever he would meet anyone new, they immediately warmed to his infectious personality.

He also had a deep respect for his elders, had a close relationship with his mum and dad .  He shared a love of cooking with his father they also loved to Stir each other on many occasions.  He even forged close friendships with friend’s parents as was the case with Delwie and George.  Dave and George shared a fondness for Holden cars.

He had a natural compassion for dogs and cats, even having a bit of a sixth sense with the 4 legged domestic pets.

He had a mischievous nature and would love to play pranks on his friends, one day totally rearranging Steve’s apartment, in reverse .  His excitable nature would hype up his nieces and nephew, which they loved, but Sara wasn’t too impressed.  He shared an individual relationship with Isis, Rama and Gaia.

He continued skydiving and building up his hours.  He shared this Adrenaline sport with his high school friends Steve and Andy.  They would jump together whenever possible and  received their licenses around the same time.

In May 2013, his life changed forever when he and Steve would go to visit Andy in Dubai for a Skydiving trip.  Andy had a friend over by the name of Irina.  Cupid struck it’s arrow and within a very short few minutes, Irina and Dave were totally hooked  on each other.

Dave would move to Dubai within 6 weeks and would forge a new life with Irina.  They were enjoying the cultural melting pot of Dubai, meeting a good network of friends and frankly could never ever suffer from boredom in a city which has countless activities and  events,  there is always something new to do, try, taste, see, encounter or experience.

When Dave’s father was diagnosed with advanced stages of cancer in May 2015, he would go back to Australia to be with his family.  Sadly, Dick died in July of 2015.

He returned back to Dubai.  Within a few months, Irina and Dave returned back to Australia and were married on 21st of November 2015 and, then would have a lavish ceremony in the Philippines on the 2nd of April 2016.

He was also working his way up within the pastry cheffing industry.. He was sought out by Gastronomica, who are planning on opening leading edge restaurants in the Middle east, they used Dave as a brand embassador with his pastry knowledge to help guide them in menu planning and developing exclusive pastry recipes.  Dave had travelled to Kuwait,  and was to travel extensively throughout the Gulf region.  He was able to draft a menu plan.

His ultimate dream though was to become a Skydiving Instructor, he was building up his skill set to participate in Wingsuit flying, with next year his goal was to be  enrolled into a Base Jump Course.

On the 28th of October, while skydiving with Skydive Dubai, Dave , tragically lost his life at Le Royal Meridian Resort.

Dave’s funeral was held on the 13th of November 2017 at Leura Memorial Garden at 2pm. 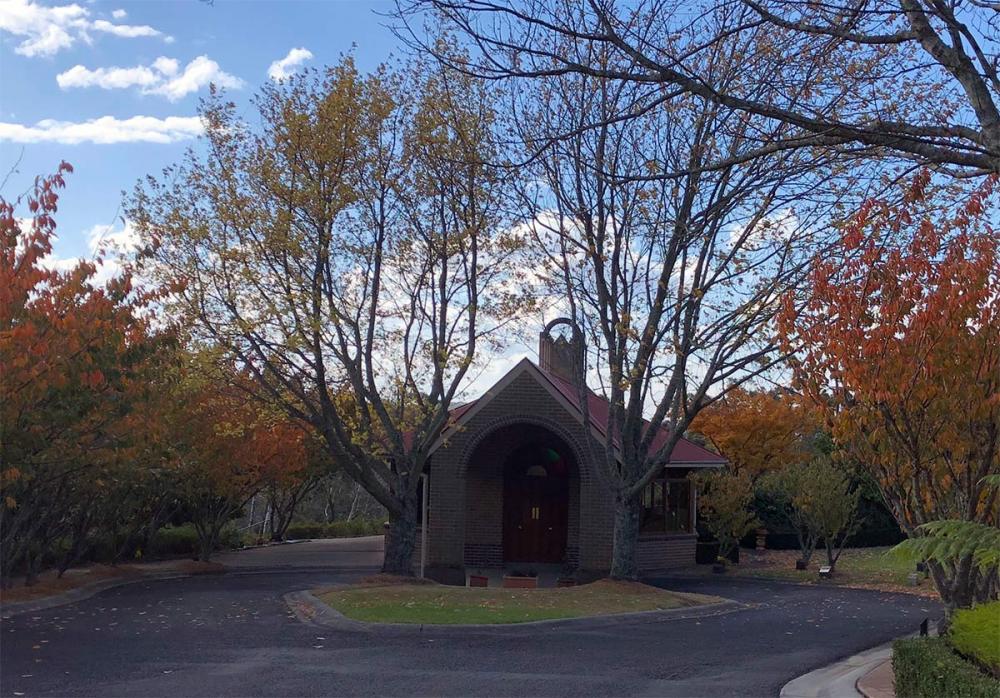 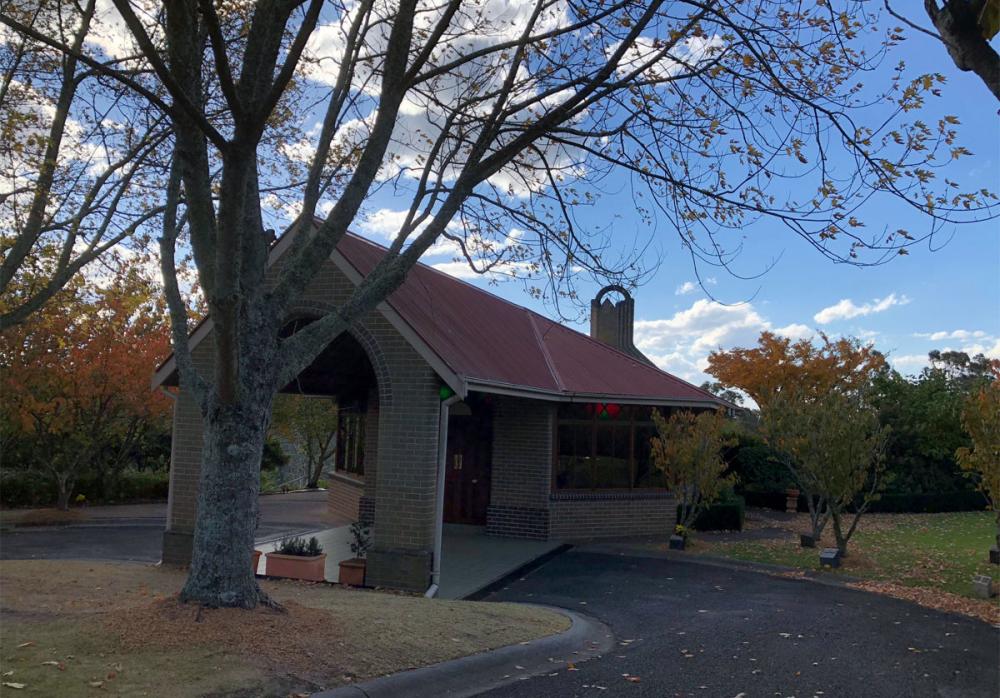 The following Order of Service Memorial Card was handed out. 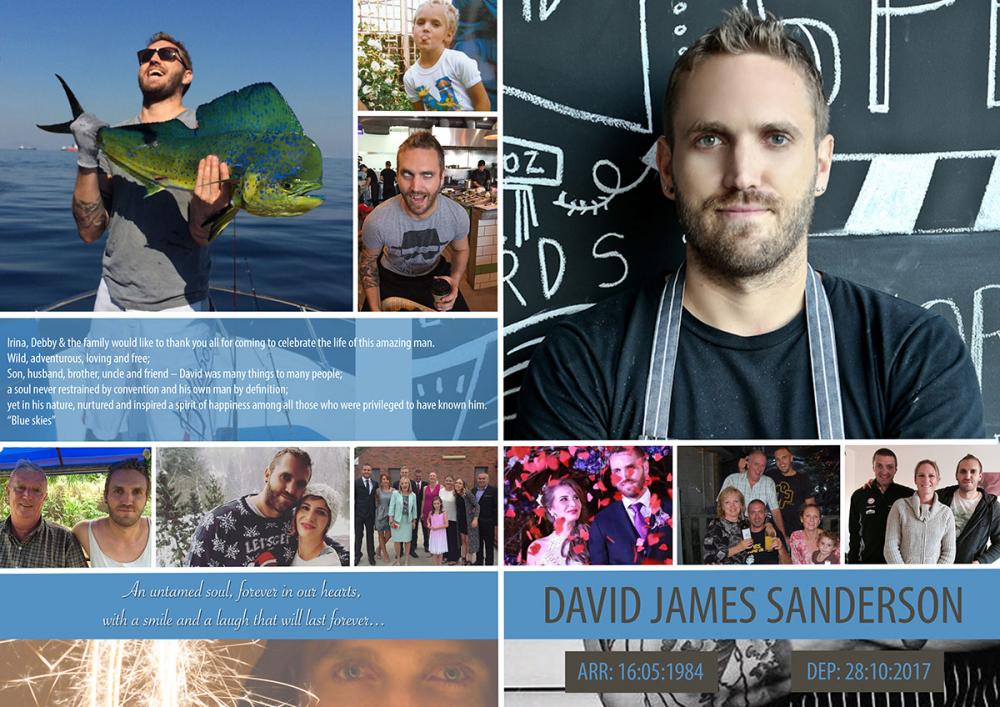 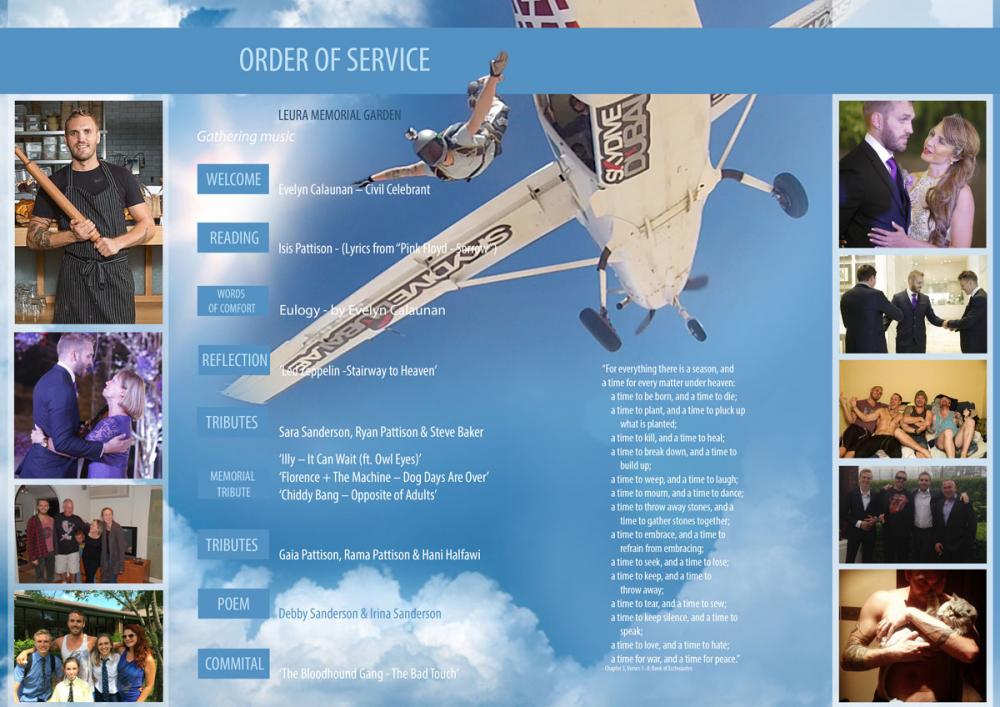 Dave’s coffin was pallbeared in to by his brother Nick, his brother in law Ryan, his nephew Rama and friends Steve, Andy and Matt.

Midway through the ceremony the following DVD Memorial Tribute was played.

Stop all the clocks, cut off the telephone,
Prevent the dog from barking with a juicy bone,
Silence the pianos and with muffled drum
Bring out the coffin, let the mourners come.

Let aeroplanes circle moaning overhead
Scribbling on the sky the message He Is Dead,
Put crepe bows round the white necks of the public doves,
Let the traffic policemen wear black cotton gloves.

He was my North, my South, my East and West,
My working week and my Sunday rest,
My noon, my midnight, my talk, my song;
I thought that love would last for ever: I was wrong.

The stars are not wanted now: put out every one;
Pack up the moon and dismantle the sun;
Pour away the ocean and sweep up the wood.
For nothing now can ever come to any good.

Once the committal words were said and curtain closed the following song was played, which was a favorite of Daves.

Over the Palm, Dubai

It was Debby’s desire to see what her son last saw before he died. After the funeral, she planned a trip to Dubai. Dave’s best friend Steve organized the jump with Skydive Dubai on the 4th of April 2018. Both Irina and Steve had Dave’s ashes strapped to their arms.

Over the Desert, Dubai 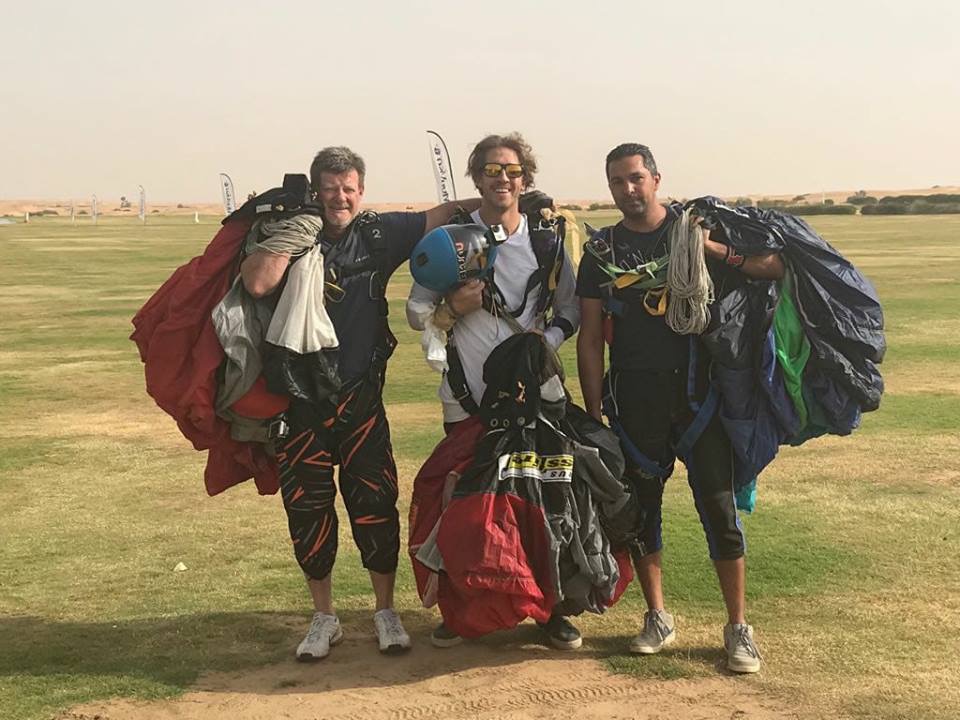 Dave’s very first skydive in Dubai, was in April 2012 at Skydive Dubai Desert Campus, in which he jumped with his friends Steve and Andy. It was Steve’s wish to take Dave back there for his final jump with Hani and Wayne.