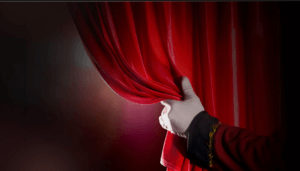 Listen to the audio version of the blog post below. The audio is read by me.

I have always considered myself to be a professional but sometimes I hear things literally and it’s not exactly the right way of doing things.

My second day of working as funeral staff would be a typical day, or so I thought.

The deceased was a man of 87 years and the ceremony would be held at the local crematorium.  Jo, the funeral conductor, briefed me in the car that we would be pall-bearing the gentleman in.  I remember looking at her and thinking I hope he’s not too heavy.   The other two pall-bearers were in there 60s and Jo and I were no spring chickens!

When we arrived at the crematorium, there were quite a few mourners already gathered.  We had them sign in the guest book and exchanged pleasantries.

Just before the clock struck the hour, Jo played the entrance song.  As we got into position by the hearse and the coffin was rolled out, the older pall-bearers carried the top part of the coffin (the head) and Jo and I grabbed the tail end (the feet).  The full weight of the gentleman and coffin could now be felt. It wasn’t as heavy as I expected.

Jo whispered to me ”As soon as we put the coffin on the catafalque” [a catafalque is a raised platform which supports the coffin], “remember to bow”.  I nodded.

As we got to the chapel door, Jo asked the congregation to please stand.  We slowly walked down the aisle and once we got to the catafalque, Jo and I placed the foot of the coffin on the platform and the older pall-bearers pushed the coffin up and swung the head to the right.

The coffin was positioned and the flowers were readjusted.   We stepped away from the coffin. As instructed, I turned to face the congregation and got ready to bow.   Just in the nick of time, Jo grabbed me and turned me around to face the coffin. 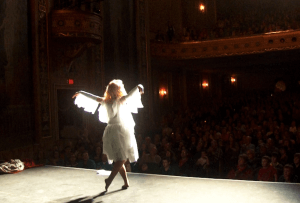